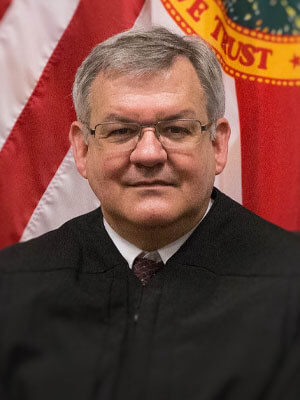 Circuit Judge Howard O. McGillin, Jr. was appointed to the bench in 2014. He earned an undergraduate degree from the U.S. Military Academy at West Point, N.Y., a juris doctor from the University of Florida College of Law, and a Masters of Law in Military Law from the Judge Advocate General’s School in Charlottesville, Va. He served for 24 years in the U.S. Army, including 15 years as a lawyer. After retiring as a colonel, he went into private practice. Judge McGillin presides in the criminal felony division at the Putnam County Courthouse Annex in Palatka and Veterans Treatment Court at the Richard O. Watson Judicial Center in St. Augustine.

Notice to the Public
The Code of Judicial Conduct governing behavior by judges forbids Judges from discussing pending cases with the public. Please do not call the Court expecting to speak with a Judge about any case. The Court is only allowed to consider arguments made in the courtroom and in documents properly filed by parties in the case as authorized by law and the Rules of Court. The Court cannot ethically read or consider any other opinions or arguments about the case. Communications that do not meet these legal requirements cannot be forwarded to the Judge.

Courts throughout the Seventh Judicial Circuit will be closed on Monday, January 17 in observance of...